Skip to content
Home Adoption Blog Adopting a Child Gay Adoption: The Kids Are All Right 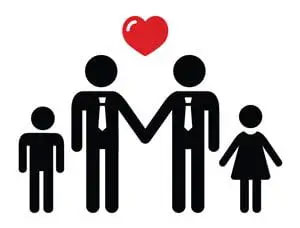 Written by: Dr. Peggy Drexler – Author, ‘Our Fathers, Ourselves. Daughters, Fathers, and the Changing American Family’

The Kids Are All Right: Gay Parents Raising Children

These days, gay parents are no novelty: We see them strolling through our neighborhoods, participating in our PTA meetings, and, perhaps most notably, appearing on our TV screens: Mitchell and Cam, fathers to Lily, on the ratings smash Modern Family; Glee’s Sue Sylvester, expectant mom to a baby conceived with an as-yet-unrevealed sperm donor, and Rachel’s dads, played with humor and grace by Jeff Goldblum and Brian Stokes. Last year, Annette Bening was nominated for multiple awards, including an Oscar, for her portrayal of a lesbian mother to two teens — and Julianne Moore’s better half — in hit indie movie The Kids Are All Right. These Hollywood examples are important in that they’ve helped present gay parenting as not unlike straight parenting: challenging, joyful, complicated, and most of all, entirely normal.

Though this media “mainstreamification” of gay parenting is a relatively new phenomenon, for decades, gay parents have had children in all sorts of family configurations — whether through adoption, previous heterosexual relationships, or, increasingly, by choosing to have biological offspring using in vitro, surrogate, and other methods. According to the 2010 census, a quarter of same-sex American households are raising children, gaining ground on heterosexual couples, who parent at a rate of just under 50 percent. Just as these families have appeared front and center in the opening credits of the American sitcom, so too have they shouldered themselves front and center in the group photo of the real life American family. Turns out “alternative families” aren’t so alternative anymore.

And yet their existence continues to provoke social and political outrage. In January, then-presidential hopeful Rick Santorum told a New Hampshire audience that children are better off with a father in jail than being raised by lesbian parents, while Pope Benedict cited the need for children to live in heterosexual homes as a way to, essentially, preserve humanity. Last November in Illinois, Catholic Charities ceased its adoption services after the state refused funding unless the groups agreed not to discriminate against gays and lesbians. Although gay and lesbian parents are a powerful resource for kids in need of adoption — at least half of adoptive gay parents are supporting foster children — Catholic Charities simply quit the business rather than comply.

Earlier this month, when President Obama announced his support for same-sex marriage days after North Carolina voted to ban it, he changed the conversation considerably by arguing that concern for children is a reason to support, rather than oppose, gay marriage. He cited gay couples in his own life, “same-sex couples who are as committed, as monogamous, as responsible, as loving a group of parents as any heterosexual couple that I know,” he said. “And in some cases, more so.” His support for gay marriage was itself a landmark turn, but just as notable was its indirect affirmation of gay couples as parents, which served to rebut the standard argument against gay marriage — namely, that it risks the well-being of children and the family.

But still many are left wondering. They want to know: How will these children of gay parents fare? Can kids raised in homosexual homes turn out (gasp) okay?

The answer is yes — and resoundingly so.

Throughout many years of working with families, I’ve studied the lives of gay parents raising sons and daughters. In general, gay parents tend to be more motivated, more committed, and more thoughtful parents than heterosexual couples. That’s because they usually have to work very hard, and plan very far in advance, to become parents, and so rarely do so by accident.

The children, meanwhile, show few differences in achievement. They perform as well in school, at sports, and in extracurriculars as peers with heterosexual parents. At the same time, they are more self-aware, more adept at communicating their feelings, and exhibit more empathy for people different from themselves. They learn early how to negotiate the outside environment, gauge other people’s motives, and assess how open they dare to be in specific situations. They are strong. In my work, I routinely saw how, with enough support from their families, children of gay parents developed skills at thinking independently and standing up for what they believed which distinguished them from many children with straight parents. In my study boys of two-moms families spent more time with a parent than the boys of mom and dad couples who more readily relegated childcare responsibilities to babysitters.

Much of the concern for the children of two-mom families has centered specifically on boys. The thinking goes if one mom raising a boy is trouble, two moms must be double trouble. Unfortunately boys on average have seemed, especially in recent years, prey to confusion, resentment, and destructiveness — something credited to the rising proportion of males being reared in fatherless homes. If only fathers were more fatherly, we are told, boys would learn to be good men, a subject I explored in my book Raising Boys Without Men. People want to know: How will boys learn to become men? Where will they find their role models? Will they grow up to be gay?

Here’s the truth: “Boyness” is inherent. It doesn’t have to be instilled, or taught. The boys I encountered in my work devised boyhoods using not just social cues, but what seemed like innate male-identity-building talents. They rode skateboards, they turned sticks into swords, toast into guns, they were leaders on sports teams. No one taught them to do these things. They just had it in them. And, in fact, all the research has reported children of gay parents feel less bound, less restricted, by gender stereotypes than those raised in straight households. They were freer to pursue a wide range of interests. There were no “boy things,” no “girl things.” Just kid things. That’s key.

But kids of gay parents do often face discrimination, and it’s not always the easiest childhood (though show me one that is). Still, challenges are not defeats. Perhaps as a by-product of the discrimination they sometimes face, children of gay parents tend to be more sensitive to others and to the positive and negative feelings in themselves. The boys I’ve worked with tend to be more thoughtful and measured in how they exert themselves in the world. And they have no greater chance of “turning gay” than the child with the straight parents next door. Science has proven that homosexuality has biological roots, and if we believe that it is neither a choice nor an unlucky orientation, then we can relax and trust that these young men and women will find out what possibility comes naturally to them. As one boy, 10-year-old Kenny, told me matter-of-factly, “I’ll know if I’m gay or straight when I’m older.”

Of course, children of gay parents may ponder their sexual orientation at an early age, and establish the terms of their sexuality with more self-consciousness than most other young adults. But most children of gay parents will ultimately grow up to be straight, if only because most children grow up to be straight — period. They will then relate to those who are not straight with great respect and openness.

In a 2007 paper published in the American Journal of Orthopsychiatry, 28 out of 46 adults with at least one gay parent spontaneously offered that they felt more open-minded and empathetic than people not raised in their situation. My work and other research with the children of gay parents supports this finding.

The children I studied, and those growing up around us now — those kids being raised by gay moms and dads in loving, nurturing homes — promise to offer, as adults, the best characteristics of men and women. They are emotionally literate. They are socially evolved. Growing up without ingrained, preordained ideas of gender roles, nothing is beyond their reach — including the prospect of exploring life with generosity and creativity. They represent not the worst-case scenario, but the best.