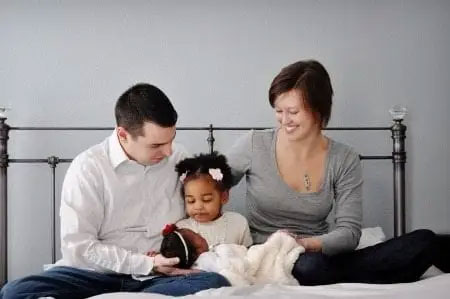 African Americans have every reason to be suspicious of white people adopting black babies. From slavery to unethical medical experimentation to Jim Crow laws and more, history demonstrates that white people haven’t always been very kind to people of color, to say the least. As an English teacher, I read many books, and I can recall the numerous titles that talked about whites using slave children as entertainment at dinner parties while the children”s black parents looked on, powerless to stop the disgusting circus, knowing that at any moment, their kids could be sold to the highest bidder, stripped forever from their biological parents.

As an adoptive mom to two black children, and thus, the matriarch of a transracial family, I can testify that white privilege, prejudice, and stereotypes against black people still exist despite the number of people who claim to be colorblind. In addition to racial prejudices, my family is sometimes treated as second-class because we came together through adoption instead of biology. We have been asked horrendously nosy questions: Why didn’t you want your own kids? Are your girls real sisters? Why didn’t their birth mothers love them? I have been stopped in restaurants, airplanes, bathrooms and stores by strangers trying to figure out what’s up with my family.

Once I was preparing to take a weight lifting class at my gym when a black man in his sixties approached me and asked if the little girl I carried in with me every day was my child. I said, “Yes.” He said, “Is she really your child?” “Yes,” I said, growing irritated. Then he asked in a sincere tone, “Why didn’t you adopt one of your own kind?”

I have been asked the “why do white people adopt black babies?” question many times from people of various ages and races. Even little kids look back and forth between my daughters and me and ask, “Why are they brown?” It’s hard for me to respond, mainly because I”m often caught off guard by these questions and because there is no right answer that will satisfy their curious minds. I am not an adoption professional with a title, but I can share with you from experience and research some possible answers to the “why.”

First, there aren’t enough black, adoptive couples willing, able, or available to adopt black children. Look on any major adoption agency’s website under “waiting families,” and you’ll see what I mean; the couples smiling back at you are predominantly white. The reasons for this are debatable, complicated and numerous, ranging from socioeconomic disparity to cultural norms to familial beliefs and traditions. And, despite what some may believe, black birth mothers sometimes choose white parents to adopt their children, even when there are available black couples.

Second, while there are way more white couples who say they want to adopt white children only there are approximately 24 white couples available to every white child available for adoption some of us don’t care what color the child is. When we started our first adoption process, our social worker told us that out of more than 20 families waiting to adopt, only two were open to adopting a black child. Two. Our hearts ached. I believe some families, like ours, realize that ultimately, they want to be parents, and the child’s race is not a reason to say “no” to a child who needs a home.

Third, non-traditional family structures are far more acceptable than ever before, and this holds true for transracial adoptive families. You have celebrities to thank. Like it or not, celebrities, who often live their lives in front of the paparazzi and in the pages of gossip magazines, TV shows and blogs, set standards for our society, and one that’s become a reoccurring meme is that of the white celebrity adopting a child of color. Angelina Jolie and Brad Pitt, Sandra Bullock, Tom Cruise and Madonna all adopted transracially, making the transracial adoptive family, while still unique, seem much more common. And when it seems more common, people are more likely to accept it and some of them are likely to follow suit.

Ultimately, I think my girls’ birthmothers deserve respect for the decisions they made. They are both educated, caring women who chose us to raise their daughters. Was race a factor in their decision?  Perhaps. But every mother I know, regardless of race, wants opportunities, security, and love for their children. Color doesn’t decide who can and cannot provide those things.

Personally, my motivation to be open to adopting a child of any race came from my belief that God is ultimately in charge. We were educated on transracial adoption, and we live and work in diverse communities. Additionally, we travel often, enjoying the experiences of learning about other races and cultures. We also trusted that if the child’s birth mother felt we were the best parents for her child, we would respect and honor that decision, regardless of the child’s skin color.

Now, how do I explain that in a nutshell to a nosy stranger?

I do not think every adoptive family is prepared to adopt a child of another race. When parenting children of color in a transracial family, love simply is not enough. I’ll repeat. Love is NOT enough. Research on transracial adoptees demonstrates time and time again that transracial parenting is a unique task one that must be carried out with education and intention in order to raise confident, secure children.

Each morning when I wake up, I don’t think, “I’m going to get my adopted black kids out of bed.” My day looks much like any other mother’s: meals, play time, work, errands, chores, diaper changes, tantrums, and tickle fights. My girls are “my own” despite the questions we are often asked or the stares we encounter. Our motivation to adopt and to accept a child of any race is, despite the complexity of race and adoption in America, quite simple: I wanted to be a mother to the child God had for us.

Rachel Garlinghouse is the proud mother of two brown babies. She is a freelance writer and college writing teacher. Read more about her family at White Sugar, Brown Sugar.