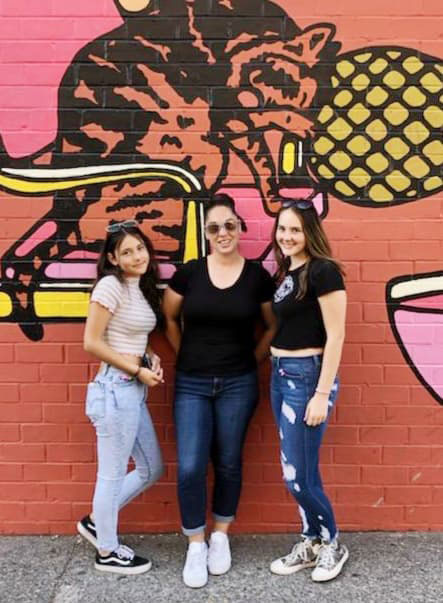 If you’re just tuning in to my Friends In Adoption blog, my first blog talks about my adoption and how I felt growing up as an adopted child. My second blog is about how I met my biological sister (who I just recently found out existed!) when she was visiting our aunt in Rhode Island. It was an incredible experience and one of the best days of my life. Today, I will tell you about how I met my mother.

Of course, I first met my mother, Tracey, in the hospital like all of you met your mother. My adoptive mom, Robin, told me that on the day she went to pick me up at the hospital, Tracey handed her my car seat carrier in the hospital parking lot and said “take good care of her.” My mom said “I will,” and Tracey said “I know you will.” My moms hugged each other. Both had tears in their eyes. Tracey told me when I met her that she knew she had made the right decision when instead of sitting in the front seat of the car, my mom sat in the back with me.

I saw Tracey a few times after that, but I was too young to remember. I saw her once when I was six months old. My parents planned a picnic at Colt State Park, a beautiful park overlooking the ocean in Bristol, RI. A few months later, on the day my birth mother Tracey went to court to release her parental rights, Tracey called Robin and asked if she and her mom could come over for a visit since she was in the area. My mom quickly agreed, called my dad to come home from work for lunch, and then ordered pizza, so we (and by “we” I mean them, as I couldn’t eat solids yet) could enjoy lunch together. I obviously only know these things from stories I was told, but over the years I used these stories to paint a picture of what Tracey must be like.

Eight months later, my mom sent Tracey a Mother’s Day card and a framed photo of me, but it was returned “moved with no forwarding address.” My mom tried again at Christmas and sent another card, but again it was not forwarded and returned. The adoption agency told my mom that sometimes it takes a birth mother some time to heal from her loss and maybe she will reach out to us sometime in the future. They were right: it happened the day after I turned sixteen years old.

The day after my sixteenth birthday, Tracey wrote my mom a private message on Facebook, and told her that I had a sister who was born three years after I was. While we lived on the east coast, Tracey had moved to California when my sister was little. The day after Tracey and my mom chatted on Facebook was Good Friday. That day, my mom took me and my sister, Abby, to our favorite diner for breakfast. I knew something was up when my mom told me she had to tell me something. I could see it in her face. She said it was good news. She said Tracey had contacted her on Facebook and I had another sister who lives in California.

As I wrote in my last blog, my sister, Rachael, and I first started to write each other over Instagram, and got to know each other that way. Rachael was visiting our aunt (Tracey’s sister) in Rhode Island that summer, and my mom arranged for me to meet Rachael. It was literally like looking in a mirror. We have the same color hair, the same freckles, the same olive skin, and the same smile. She was me but shorter and a few years younger. It was one of the most remarkable days of my life.

As the year went by, I kept in touch with Rachael, and my mom and Tracey kept in touch on Facebook. My newly discovered aunt and uncle and two cousins in Rhode Island became a huge part of my life as well as the rest of my family. My aunt often takes Abby and I for the day or for the weekend, and my mom gets teary-eyed when my cousins call her “Auntie Robin.” She loves them all so much. We all do. But I still hadn’t met my mother.

Soon after I turned seventeen this past March, Tracey sent my mom a message that she would really love me to visit her and Rachael in California this summer. My mom had hoped I would be able to travel with my aunt to California. After all, meeting your birth mom after seventeen years could be an emotional experience. But the timing didn’t work out with high school and my aunt’s job, so my mom said she would take me to California. It was difficult, but I told my mom I didn’t want her to come to California. I was okay with her coming on the plane and to my initial meeting with Tracey, but then I wanted her to fly home. I felt like if my mom was there, I wouldn’t get to know Tracey, and I really wanted to get to know my birth mom. My mom knew I would be in good hands as my aunt had told my mom so much about Tracey, so she said “well, she has entrusted me with you for the last seventeen years, the least I can do is trust her for a week, and I do.” And I knew I would be fine as I would be with my sister Rachael. This was something I wanted to do on my own. So my mom booked a direct flight from Boston to California and I was off to meet my birth mom, a few days after I finished my junior year of high school.

I met my birth mother in the San Francisco airport. I knew right away it was her. Now I know where my freckles came from. This is the first real memory I have of my mother. She ran to me and hugged me, and I wanted to cry but I couldn’t. I was so in shock and full of so many emotions I didn’t know what to do. I hugged her and I hugged Rachael. After seventeen years I got to hug my birth mom. I was happy and a feeling of complete joy came over me.

My week in California was extraordinary. I met my great-grandmother, an uncle, an aunt, a cousin, and I found a part of myself that I had been missing. I knew I belonged there. I walked on a black sand beach, saw the sea lions on a pier in San Francisco, went shopping at the Haight-Ashbury district, ate tons of food, but most importantly I got to know Tracey and spend time with my sister Rachael. I’m so happy my parents chose to have an open adoption. My parents gave me roots and the day my mom booked a plane ticket, she gave me wings. My mom gave me the freedom to love both of my families. She gave me my history and connections that will last a life time. I will be forever grateful to Friends in Adoption, which promotes open adoption. It’s an incredible feeling to know you have two families. Your birth mom gives you the gift of life and your adoptive family gives you the opportunity to have the best life possible. When two families can come together and be a part of an adopted child’s life, it reassures them that there are so many people in the world that love them so much. Without open adoption I would never know where I came from, my background, or my family history. I am so thankful both of my families are so open to each other and support me. I love them all so much.